The Nicanor Parra Library is intended to be an iconic building symbolizing growth and improvement for the University Diego Portales in Santiago, Chile. UDP was created in 1982 by Manuel Montt Balmaceda, making it the second private Chilean university in Santiago. During this time, the university’s location in the southwestern corner of Santiago made it possible to purchase large semi-abandoned houses at low prices, allowing for UDP to grow its infrastructure to an area of almost 650,000 sf. In 2000, to accommodate for more educational programs and careers, new infrastructure was needed for the university. This initiated a process of urban renewal that combined modern architecture with the restoration of more traditional architecture in the neighborhood. The Nicanor Parra Library represents this very well as it is an extension of a building, comprised of classrooms and offices, that was built in 2004 in the backyard of a house built in the 1940s. This back of this building was non-structural to allow for multiple openings and connection points into and throughout the library that contributed to better pedestrian interaction between the spaces. Additionally, the library was intended to represent a connection between the neighborhood, surrounding communities and its context by becoming an “extension center”. By doing so, future expansions such as exhibition spaces and auditoriums are made possible to further strengthen its integration into the community.

Upon entry of the Nicanor Parra Library, one is confronted with a pixelated geometry intertwined with various elements of transparency. This is achieved through relationships between the primary materials – concrete, glass and wood. Mathias Klotz’s use of these materials is quite extraordinary in the sense that, combined, they enhance various features of shadow, light and line. The lines of the screen on the interior atrium façade appear to bring in light from above, however, the structure is simply stained wood that mimic the verticality of the space and allow for a level of privacy. The totality of the interior façade is glass adorned with planter boxes of various sizes that break up the openness of the atrium while creating an illusion of depth by use of shadows. On the exterior façade is a continuation of the vertical gardens with cables that support growth of plants that protect the interior spaces from the summer sun and to allow light in during the winter.

The building has a fairly simple rectangular floor plan that surrounds the five-story atrium providing opportunities for increased natural light and cross ventilation of the enclosed spaces. The library is divided into five levels on one half of the building floor plan, with faces adjacent to the atrium and to the street. On the other half are classrooms, cafes and small auditoriums with the cafeteria and main auditorium on the basement level. The rooftop of the building becomes a terrace with gardens that emulate the vegetation grown on the mountains surrounding Santiago. 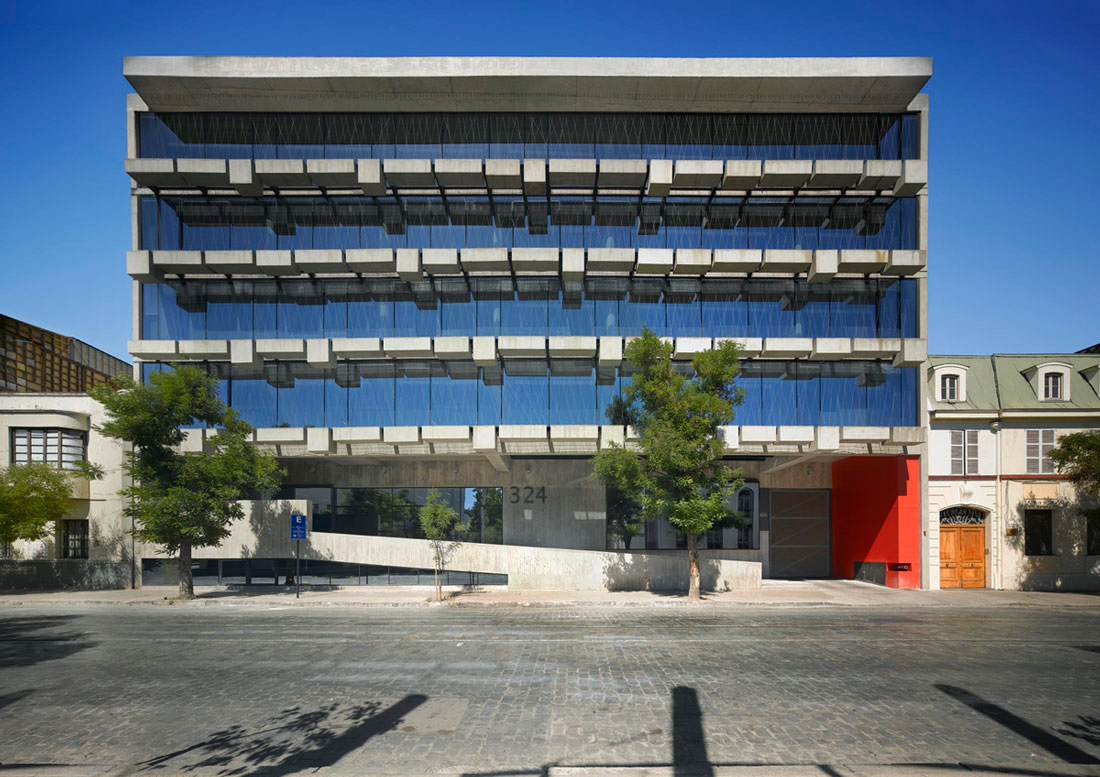